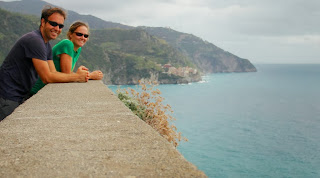 Bonjoir from central France!  Navigator remains dry-docked in Trinidad for hurricane season, and our friend Rich has arrived back at the boatyard and reports that all is well with the boat - hooray!

Since our last update, which was from the Greek ferry "Superfast," we returned to Italy and finished our Italian adventure. The first stop was Ravenna, on the east coast.  This town was one of our favorites: it is famous for it's mosaic floors and ceilings and they definitely live up to their hype.  Something about standing under centuries-old art which was created by sticking thousands of small pieces of rock, tile, or glass together leaves one in awe. 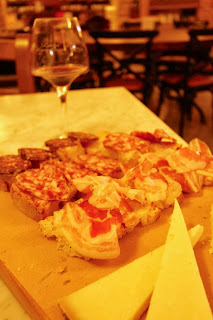 Next up was Florence.  Since we had heard the new Dan Brown book (Inferno) takes place in Florence, we figured we should read it while in the neighborhood.  I thought the book was not bad, but not the best.  However, it was really cool to see all the things he mentions in the book in real live.  For instance, without giving away too much, Dante's death masque figures prominently in the book, and we wandered across it during one of our museum treks.  Kind of cool.

In any case, Florence is famous for being the home of the Renaissance, and we enjoyed looking at all kinds of interesting art, including Michelangelo's colossus, "David." "David" was my favorite piece of art in the city, but there is so much to see it get's tough to find enough time in the day.

In the Florence area, we also drove through the Chianti region, famous for its wine.  It was really neat to see the grapes hanging from their vines, ready to be picked (harvest is right around now).  We stopped into a shop in Chianti and sampled the fresh salami, olive oil, jams, and wines.  I didn't like the wine but the olive oil was great! 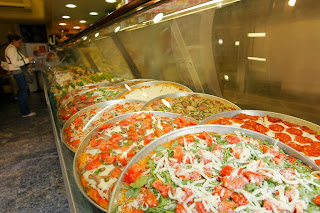 After departing Florence, we headed to the coast for a few days. First up was Pisa and its leaning tower (yes it leans), but the highlight was an awesome lunch in town with fresh pasta and veggies...can't beat it. Next in the coastal adventure was Cinque Terre, which are 5 coastal villages connected by a footpath (and train), and don't have many cars...so they harken back to ye olde fishing village.  They were quite crowded, but it was nice to walk along the coastal path for the day, stopping in each village along the way for pictures or salami, or fruit. 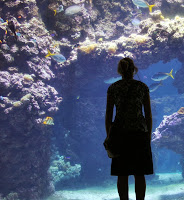 We said goodbye to Italia after 3 awesome weeks of touring, and headed to back to France for our last leg. Along the way was the principality of Monaco on the French Riviera.  I had been there once previously on EAGLE, so it was cool to check it out again and show Kellee the sights.  The best part was the oceanographic museum and aquarium, which was once lead by Jacques Cousteau, one of our heroes.  The aquarium has a really diverse collection of species, and the museum featured all kinds of old oceanographic equipment and relics.

We also stopped by the Monte Carlo casino.  The picture shows our results...all we did was type in a 4 digit code and money came out!  Ok, just kidding, that was from the ATM.  We didn't gamble...too rich for our blood. 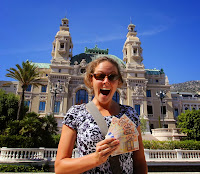 We did a drive through of Cannes and the south coast of France before heading inland to the Gorge Verdon, a geologic feature in southern France which is likened to a "small grand canyon" in the guidebook, which I think is an oxymoron, but in any case it was quite scenic and featured precipitous drops, so we stayed away from the edges.

We also found ourselves with a couple extra days in our schedule, so we made the 5 hour drive south to Barcelona and Figurers, in Spain, to do some sightseeing.  The Cathedral in Barcelona is still under construction (120 years after beginning), and is expected to be completed in 2040.  It's amazing...modern architecture and lighting make it a pretty neat place to be.  Figurers was home to the Salvatore Dali museum which was one of the strangest places I've ever been, but was still neat to see.

That brings us up to date.  We're currently camping in the Dordogne Valley in central France, and tomorrow we'll go see a few archaeological sites....hopefully including the Font du Gaume and Lascaux caves....20,000 year old cave art from Cro-Magnon peoples who lived here during the last ice age.

Until next time - au revoir!