It's been a whirlwind week and a half since we left Trinidad.  We moved up our flight after finishing up the needed boat work and opted to spend some time with the Gaffeys in central Florida.  We thought it would be cooler, but with the increased humidity, we were grateful for the air conditioning!  We also met up with Erin again and went tubing on the Itchetucknee river.  It was a great, cool way to spend an afternoon.  We took care of some needed purchases and logistics and stuffed ourselves silly.  There's nothing like good ole' home cookin! 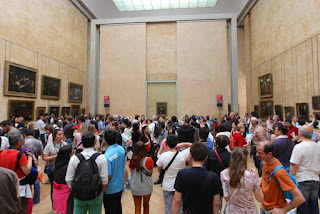 Before we knew it, it was time to head back to Fort Lauderdale and begin the next leg of the journey. We crossed our fingers and hoped our baggage would follow us from Florida to New York to Iceland and finally to Paris...and luckily, everything made it!  We were exhausted from lack of sleep on the overnight flight and 6 hour time difference and despite the language barrier and minimal knowledge of the location of our hotel, our very patient cab driver got us where we needed to go, with all of our stuff.  And then we slept...and slept some more.  We ended up getting through the night on a handful of cornflakes that we snagged from the breakfast room until the next morning. 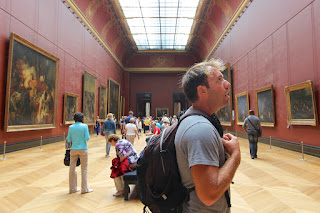 We are out in the country, near Chantilly Castle, but more importantly, about 15 steps from the train station. Monday, we hopped aboard an express train and found ourselves in the center of the city only 20 minutes later.  We made our way to the Louvre and spent a couple of hours roaming around the massive museum.  We did catch most of the uber famous collections, but the best was taking a picture of all the people taking a picture of the Mona Lisa, in our opinion, it's overhyped, but the museum itself was phenomenal.  After that, it was time for lunch! 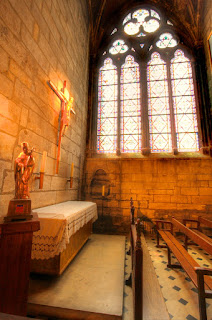 We grabbed baguette sandwiches from a street side vendor and ate them along the Seine, watching the canal ferries go by.  The afternoon was a whirlwind walking tour of Notre Dame, the Lover's Locks bridge (which we happened upon by chance), the Latin Quarter and Luxembourg Palace, an afternoon snack of a Nutella crepe, then down the Jardin des Tuileries, with a people-watching break, The Concorde square, where Marie Antionette lost her head...and where you can see from the Louvre to the Arc de Triomphe, over to the Hotel des Invalides (another massive building), through an affluent neighborhood where we stopped for caffiene to keep us going, and over to the Eiffel Tower.  We elected to enjoy its majesty from the Jardins du Trocadere which had some lovely fountains and a lot less of a crowd.  We wandered back into a neighborhood and found a nice outdoor cafe (there's one on every street corner at least) and enjoyed a nice dinner of Beef Bourguignon and stumbled back to the train for the ride back to the hotel.  The sky stays light late, until after 10pm, but we were wiped by 830. 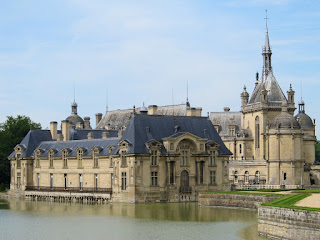 The next day was our car pick up, so we took the train back to the airport and picked up our swanky new ride for the next 3 months and then found a town to stock up on camping supplies that we needed.  Along the way, we happened by Chantilly Castle, another of those awesome, complete surprises.  We did some planning and zonked early.  Today we went back to Paris, first to Montmartre, home of Moulin Rouge and the highest hill of the city, then we took the subway back toward the city center and scoped out the Palace of Justice and the Chapel there.

The history lesson was fascinating and we were humbled by the church with the storied stained glass built in the 1200s and the Prison that housed the victims of the Reign of Terror in the 1700s.  Chris commented on how between 1200 and 1700, those buildings were built and saw such fascinating history, and are still standing and being used today, and yet, just that equivalent small slice of time (500 years) in the life of these buildings encompasses the ENTIRE history of the United States.  The architecture here is definitely built to last.   We wrapped up today back in the Latin Quarter, with sandwiches again and walked up to the Pantheon, another impressive structure.


Tomorrow we leave the hotel and Paris behind and head for the "castle district," in the Loire Valley, where the seat of power and wealth in France was once centered. We will start making our way westward to the coast, and we're excited to start the camping phase of our adventure throughout the countryside of France and the UK. 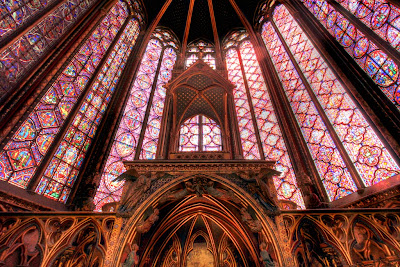 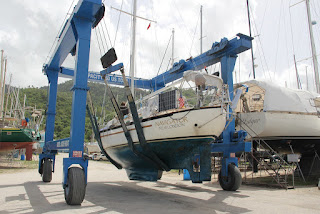 We've arrived in Trinidad, which is Navigator's home for hurricane season.  Because Trinidad is south of 12 degrees north latitude, it is seldom hit by tropical systems.  Over a thousand boats haul out here each summer while their crew travel or return to their homes for the dangerous hurricane season.  Our plan is to dry-dock here at the shipyard until December.

Our trip south from Grenada was uneventful - it was a 90 mile trip, so we left at 2pm on Tuesday and arrived before lunch on Wednesday morning.  Along the way, we passed some of Venezuela's oil fields, with their associated drilling rigs - quite a sight.

Since then, we've spent the week on Navigator cleaning, organizing, and putting her to rest for the summer.  It's a bit of a challenge because the climate is so warm - like working in a sauna.  So we start work at 5am and then take a long lunch working inside.  However, we just finished our last bit of work and are now enjoying a tasty beverage and writing this blog post to end our first sailing season. We've also gotten a chance to hang out with our friend Rich, who is hauling out at the same yard. 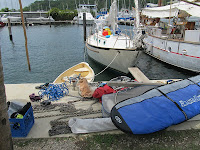 You'd be surprised how much gear fits on a small sailboat - by the time we had everything out of it's locker and airing on deck, the entire boat was filled with detritus!  But, after dryi
ng it all out, it fit nicely back in it's home, and Navigator is ship shape again.

One of the coolest changes we made was that Kellee created a custom boat cover out of canvas using the mighty sewing machine.  Two days of work  and 22 yards of fabric later, Navigator is covered from the elements and bird poo for the season, which should hopefully keep her a bit dryer over the rainy season. 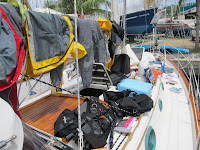 Now that Navigator is put to rights, it's time to focus on our next leg of the sabbatical - we'll be flying over to France and camping around Europe for the next 4 months.  So we've been stuffing as much junk in our packs as possible in an attempt to take as much of home with us as possible - including our folding bikes!

So...signing off from Trinidad for now.  We'll post periodic "hurricane season interlude" blog posts from Europe and beyond, but Navigator is going to take the summer off, and we'll resume our sailing in December...to an unknown destination!

Here's a video of our dry-docking yesterday: