With a previously mentioned one-week interlude in Barbuda, we ended up spending about 2 weeks in Antigua, which is a busy island with lots to see and do. 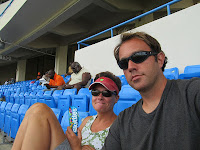 We arrived into Jolly Harbor, on the west coast, and used that area as a base while we explored central and northern Antigua, including going to our very first cricket match, between the Leeward Islands and Guyana.  It's kind of the AAA league of cricket - international, but regional, and still entertaining.  The match we went to was part of the 4 day series, so we only watched a bit, but got to learn all about the game (the bowler took 5 wickets), as well as eat some great stadium food such as skittles and johnny cakes.

We also did a long bike ride around the island, checking out the north portion of the island and a valley which housed tons of fruit trees and bushes.  We partook of some local pineapple, which was rediculicous (ridiculously delicious).  There was quite a variety of local animals that like to congregate in the road, as well - chickens, goats, wild donkeys, mongoose, humans etc. 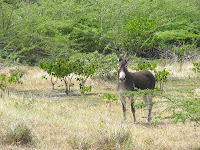 After leaving Jolly Harbor, we took the boat up to the seldom visited North Sound, where we anchored and snorkeled amongst the reefs.  However the wind was howling, so we spent more time on the boat working on projects, jumping in the water as the weather permitted.

We just returned to Antigua after our Barbuda interlude, and are now visiting the southern portion of the island, Falmouth and English Harbours, where Nelson hid his fleet during the Napoleonic Wars.  There is tons of history to check out, as well as a good selection of grocery stores and cheap food. 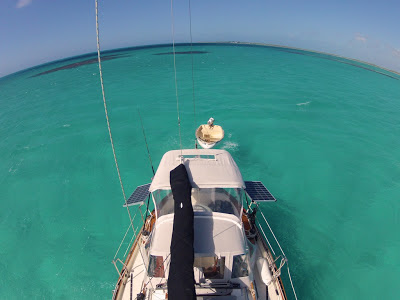 Tomorrow we set sail for Guadeloupe, a French Overseas Dependency.  We will spend 3 weeks or so there - we have a "mid-patrol dockside," which means we have to do a few projects on the boat.  But we also want to try hanging out in one place for a little while and getting the sense of a French inspired locale, and we look forward to the arrival of our friend Erin in a couple weeks for a much deserved Spring Break!

Antigua and Barbuda have been a great stop and come highly recommended for anyone seeking a Caribbean vacation!  We also uploaded a few more pictures onto Flickr (under "pictures" above). 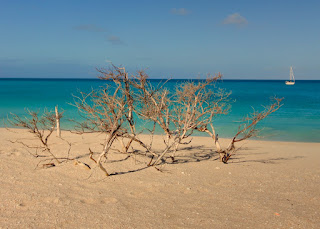 As indicated in our last posts, we weathered the "winter storm" in Antigua, and then headed up to Barbuda for a week.  We're back in Antigua now, and we'll catch you up on Antigua later.

Barbuda is an amazing place. We sailed north about 35 miles and dropped anchor in cliche turquoise water just off "11-mile Beach," which is literally 11 miles of perfect beach with no humans.  We spent two nights there, before a big northerly swell (from the northeast's blizzard last week) arrived and forced us to move to a better protected location. 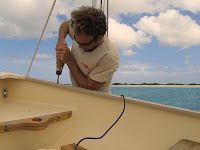 We moved down to Spanish Point, which is on the south side of Barbuda, and is seldom travelled because of the uncharted coral heads all over the place.  However, with the sun in the right location (behind you) and some good eyeballs, you can pick your way through and have the area nearly to yourselves.  The chart for the area just has a bunch of "shoal water" marked, with a note that says "transiting to the east through Gravenor Bay is possible, but put a man in the rig and eyeball it."  Nice. 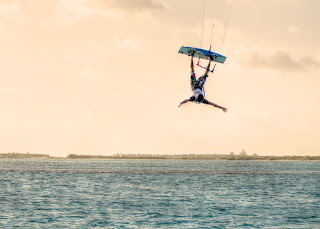 Our anchorage in south Barbuda was amazing because with the nearly full moon, the water still looked turquoise, and that in turn reflected up into the clouds to make a pretty neat scene after the sun when down.

While in this area, a couple of kite surfers came over, and when they saw us taking pictures, decided to show off a bit.  They were very talented and the pictures show just how much air they were able to get.  Apparently "kite" is a verb now, since they came over to ask..."Hey, do you kite?"  Unfortunately we don't. 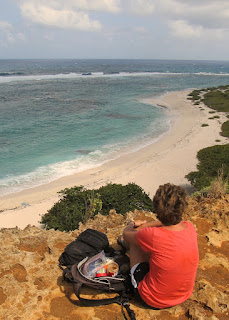 Ashore, there is not much to do in Barbuda, which is part of the appeal, but we did take a tour of the world's largest frigate bird sanctuary.  These are the birds with the big red bag on their neck that they blow up to attract a mate.  It was a neat trip.  We also rode our bikes about 30 miles along dirt trails to end up on the Atlantic side of the island at some caves and a nice beach. 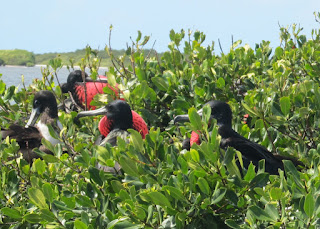 Barbuda was awesome, but the weather indicated it was time to move, so we are back in Antigua now for 3 more days before we head to the french island of Guadeloupe for some boat work and croissants.

Well it looks like we made it through ok here in Antigua.  We do have over 3ft of water in the pool, but the skies are clear and the wind is light.  Time to head out and play in the powdery stuff! 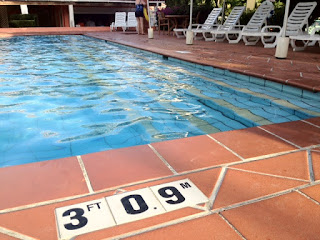 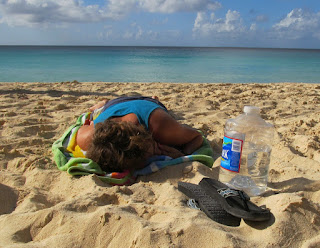 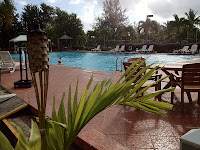 It looks like we are now starting to get some accumulation from the precipitation...luckily this squall only lasted 45 seconds and we are back to sun, but the worst is expected overnight into tomorrow.
The temperature remains 80F and the winds are steady.  It does look like we are seeing some stranded vehicles and possibly some blowing sanddrifts.

Stay safe out there!

The news is abuzz with NEMO forecasts, so we've battened down the hatches for the impending storm. 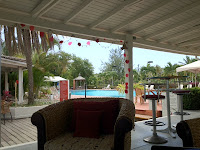 LATEST UPDATE:
It looks like it is starting to come down here in Antigua. We are getting 1 to 2 raindrops per hour here in Jolly Harbor, but thankfully no accumulation yet.  The pool temperature remains 80F and the winds are starting to veer east at 15knots. 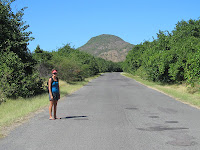 Visibility is good and the only road hazards so far are stray goats and chickens.  Stand by for further updates as the storm progresses. Stay safe! 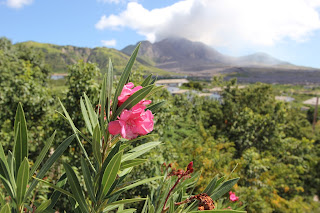 We spent three days in the lee of Montserrat, an island which was devastated by the eruption of the Soufriere Hills volcano in the mid nineties.  The volcano is still active and belches sulfur dioxide daily, and periodically erupts with lava and pyroclastic flows every couple years.

Luckily, there is a mountain range which protects the northern third of the island from the ash flow, and we found a decent anchorage in Little Bay.  Most of the island's population departed after the main eruption, but a few thousand remain, and it is a beautiful spot. 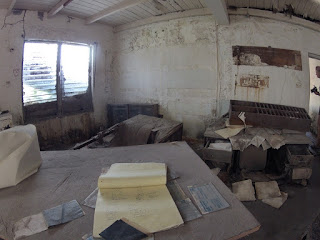 We took a taxi/tour of the island, including a visit to the destroyed city of Plymouth, it was amazing to see how quickly nature took over.  We walked inside a hotel which had been abandoned in haste when the volcano blew it's top - there were still notes and receipts on the desks, untouched for years.  In most places, the island is still quite lush - we were able to harvest mangoes and tamarind from abandoned trees to complement our supplies.

Tomorrow we set sail for Antigua, which is back on the main track of cruising sailboats and cruise ships.  We've had a great time the past three weeks or so sailing in the less-developed western leeward islands, but Antigua will give us a chance to get some repair parts, provisions, and possibly catch a cricket match between Guyana and the Leeward team...should be cool. 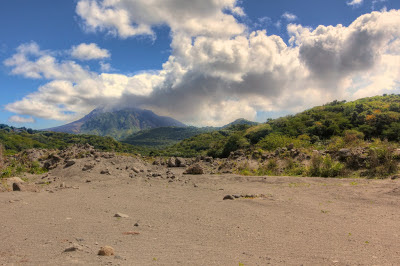 We've got a backlog of videos to upload when a strong internet connection comes our way, so hopefully look for those this weekend...it should give those of you in the northeast something to do besides shovel snow!

We journeyed over to St. Kitts' sister island of Nevis, and spent a couple days in the lee of Nevis Peak.  We circled the island (23 miles or so) on our folding bikes, including a couple insanely steep hills which required us to dismount and push our bikes...but it made for a good downhill ride on the other side.  Nevis was pretty neat to see, we saw the botanical gardens, lots of goats, and had a cheap roti/jerk pork lunch at an old plantation with a great view of the neighboring islands.

Nevis is also the birthplace of Alexander Hamilton, an American founding father and generally all-around good guy (though he perished in a duel).  He is also credited with founding the Coast Guard, hence our interest in the museum.  Yes (Heather) we can hear you snicker from here.

Right now we are at Montserrat, and will write more after we finish exploring this island with it's active volcano... 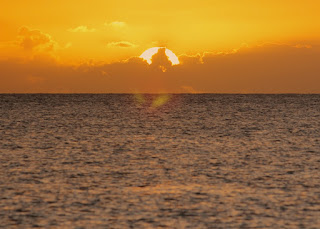 Sunset from the boat. 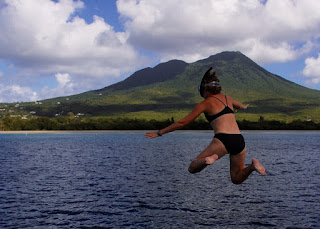 Kellee jumping in the water. 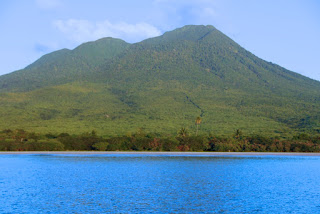 Nevis Peak, our view from the boat. 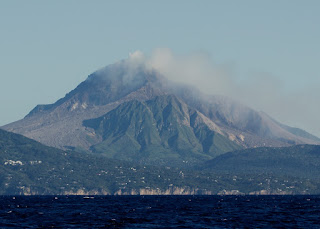