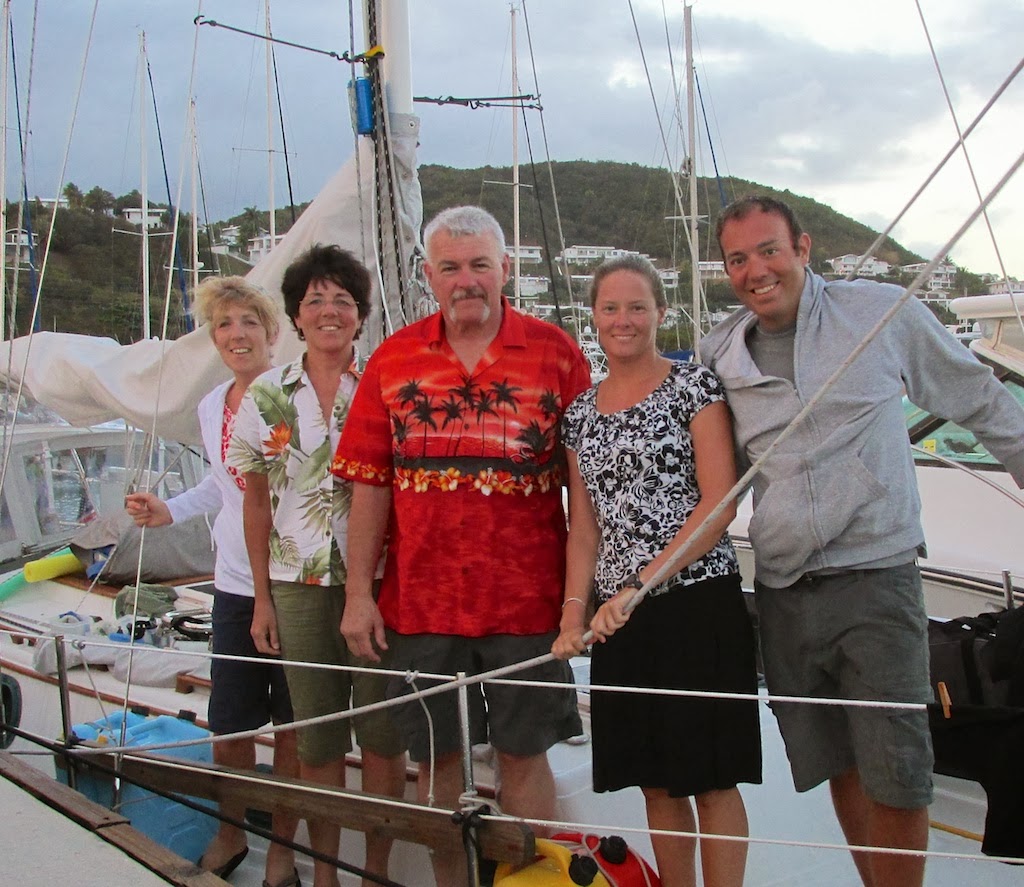 Tomorrow marks another milestone of this "adventure of a lifetime."  We leave the Caribbean and re-enter the fickle and feisty North Atlantic.  We say Adios! to lush tropical islands and super warm water.  We start "heading back."  Well, technically, we've been heading back since Trinidad, but with orders to  Alameda now in hand, and the last major stock up stowed below until our return to the U.S. mainland, it really feels like the end of an era.

What a ride it's been! Especially since last post - so let's get caught up.  We had a great visit with our family.  We checked into an ocean front villa for the first few days to be closer to some of the sights and because Navigator is comfy for two, and a little tight for five for a whole week.  The condo was a big hit.  Kathy, Don, and Lynn enjoyed the view, private beach and infinity pool, and Chris and I enjoyed the air conditioning, freezer, shower and full size kitchen!  We even treated all to make your own ice cream sundaes…we can't even remember the last time we had an ice cream sundae, it was awesome. 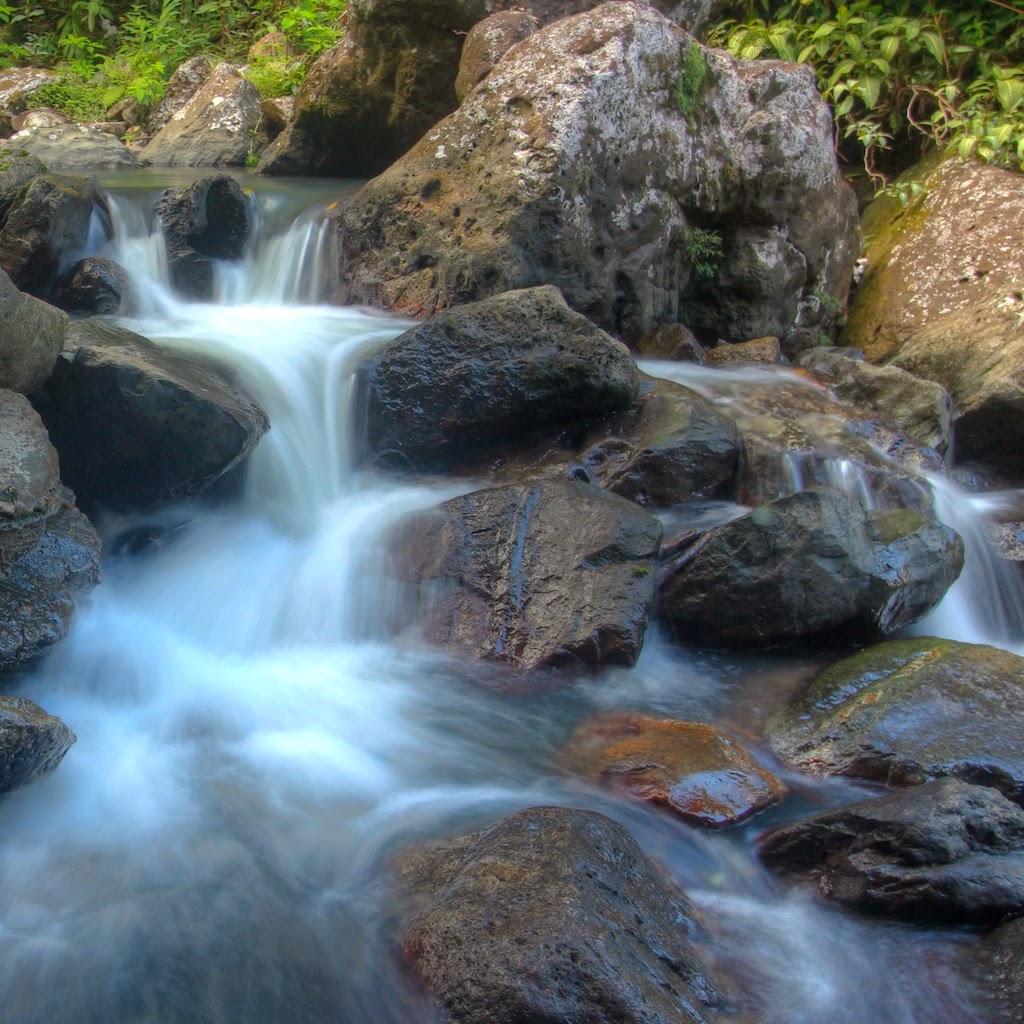 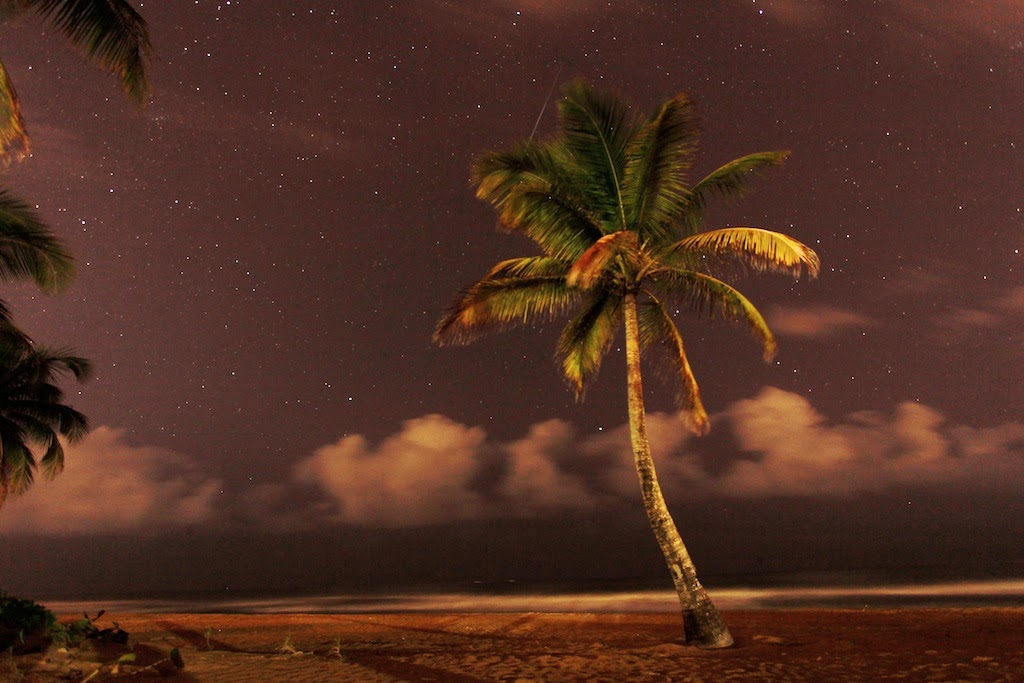 We did a hike through El Yunque rainforest, trying some photography lessons in practice and admiring the waterfalls.  The next day we just lounged around the condo, enjoying the pool and beach and dodging squalls.  We took advantage of the beach for some fun night photography that yielded some amazing pictures. 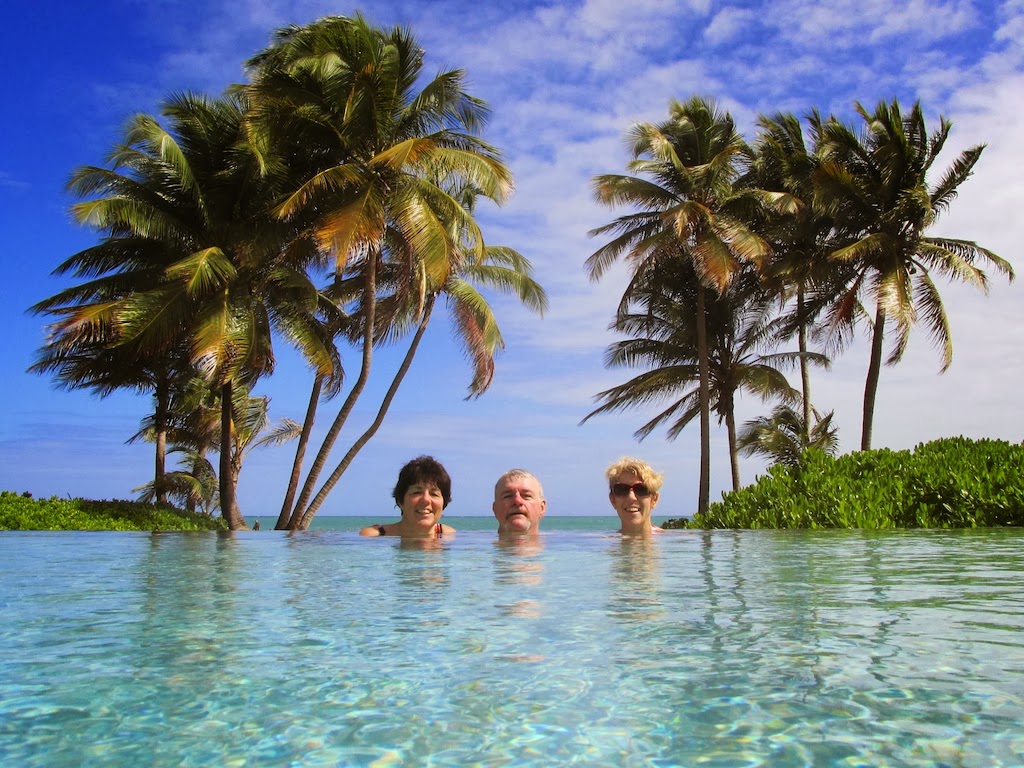 Finally, it was time to leave the oasis, so we loaded up the cooler with frozen goodies and headed into Old San Juan for the day.  Being President's Day, we were treated to free admission to the forts, so that was a pleasant surprise.  After exploring both San Cristobal and El Morro, we ventured down through the colorful streets of San Juan Viejo and settled into a tapas restaurant for lunch.  We tried all matter of local delicacies and especially enjoyed the drinks and the paella. Kathy even ate spinach. Soon after, it was time to return the car, so we drove the marina and loaded up for the next phase of adventures. 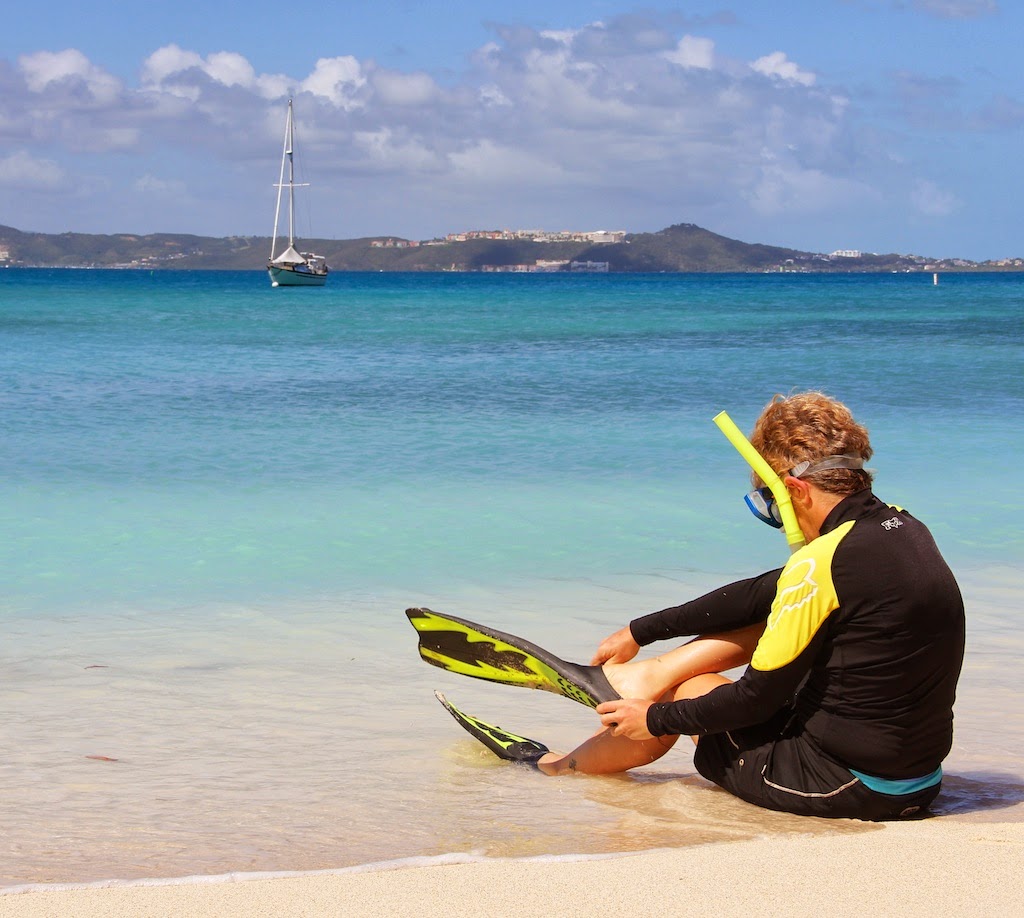 The next morning we sailed over to Cayo Icacos and did some snorkeling.  We knew it was going to be a good trip when we spotted manatees in the marina as we were heading out.  Our timing on the reef could not have been better, we were in and out before the day boats showed up and Chris even found an octopus!  After lunch we scooted down to Isla Palominos for the night and enjoyed dinner on the boat and a raucous game of "Catch Phrase," a new Navigator favorite.

The rest of the week featured more snorkeling, lots of beach exploring, turtle spotting, starry nights (complete with constellation lessons by the celestial navigation expert himself) and of course much relaxing.  Our guests enjoyed the white sand beaches instead of the white snow covering their houses back home.  The goal for the week was to take one thousand pictures and we actually exceeded that!

The weather started to deteriorate as the tail of the front from winter storm "Rex" reached all the way down here, so we headed back to the marina for the last night and enjoyed a nice dinner ashore.  It was an early morning wake up today to make the airport departure and we were saddened that such an awesome week had come so quickly to a close.

Back on the boat, we checked the weather and made our grocery list, shifting back into cruising mode.  The weather looks good for a run to Turks and Caicos starting tomorrow and we're anticipating a four day journey.  From there, we island hop through the Bahamas and plan to be in Florida by the middle of April.  We are expecting few services, so we stocked up on lots of food, water and internet downloads to hold us over.  We plan to take full advantage of the last of the tropics, soaking up the sand, sun and exploring as many reefs as time allows.

It's a major phase change for us, not only to be on the move again, but to have to pay close attention to the weather for the first time in over a year, as we will be moving north, out of the reliable trade winds and back into frontal passages from the U.S. mainland.  We're excited for the upcoming leg of our journey, but it is bittersweet because it means we are that much closer to the end of the trip. 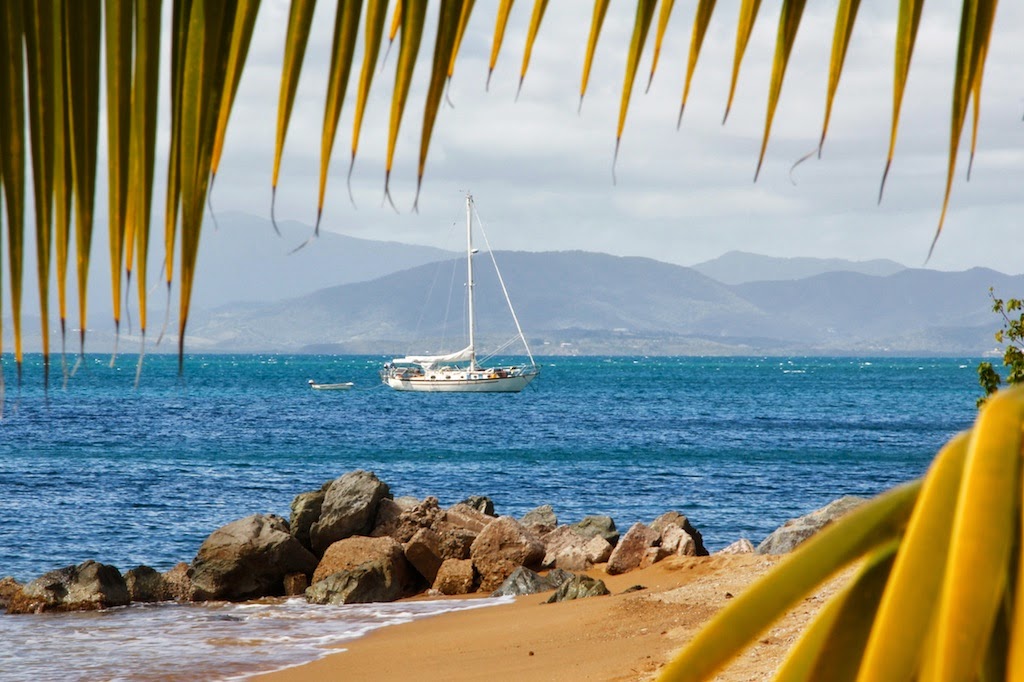 After our busy Coast Guard week, we took a few days to check out some locations on Vieques, Palamino, and Lobos islands, which are just east of Puerto Rico.

We were in search of good snorkeling sites for our upcoming guests, and found a couple nice spots that should do the trick.

Vieques was a great spot, although since the trade winds were howling, we had a tough time making progress to the east…but when we finally got there, the bottom was covered with turtle grass and colorful starfish.

After we got back to mainland Puerto Rico, we did a quick trip into San Juan to check out the area, and look for a bakery that we had heard good things about.  Alas the bakery is closed, but walking around town was nice for the afternoon.

This week, we'll be touring eastern Puerto Rico and some of the Spanish Virgin Islands (or "Passage Islands" depending on who you ask) with our guests from up north! 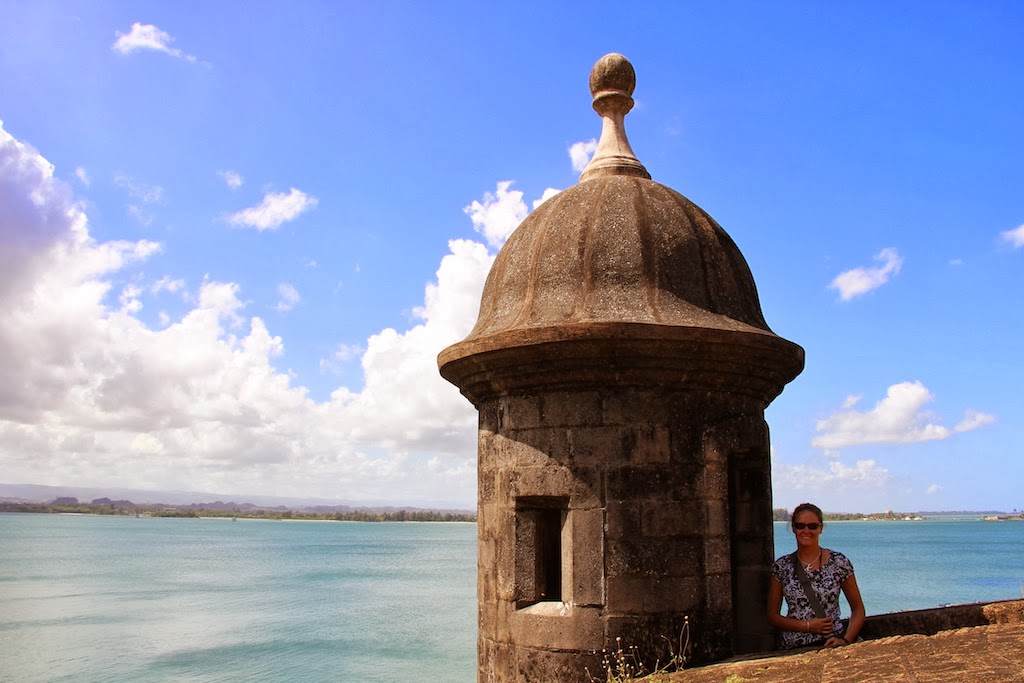